Despite the intense density of buildings typical of any urban setting, NTU is working to enhance biodiversity found within our City Campus.

Newton and Arkwright, the flagship buildings of NTU are not only home to our staff and students but also a pair of Peregrine Falcons which are protected under Schedule One of the Wildlife and Countryside Act 1981.

These feathery residents have successfully nested and raised several chicks over the last few years, much to the delight of NTU and Nottingham Wildlife Trust. Now you have the opportunity to watch their day to day behaviour via NTU's very own falcon webcam.

Newton and Arkwright also has one of the regions largest green roofs with 13 varieties of sedum covering an area of approximately 2,500m2. Not only does this array of flowering plants brighten up the view from the second floor upwards, it also plays an important role in attracting a wide range of insect species to the city centre including bumblebees, butterflies, ladybirds and grasshoppers. Bird species that can be found include blackbirds, song thrushes, wrens, robins and even rare black redstarts 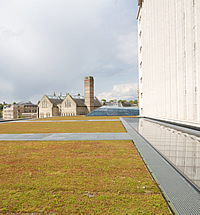